Who says I'm not a mosaic artist?

So, as I stated before, I don’t like to put out New Year’s resolutions but how about a goal for my knitting? I did this last year with my goal to make wacky and strange things and after the pie 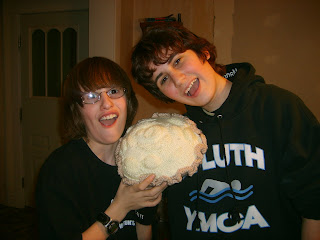 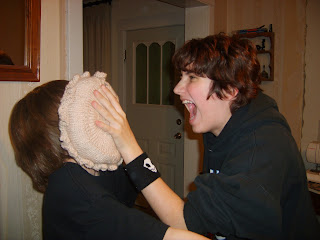 and the heart grenade; 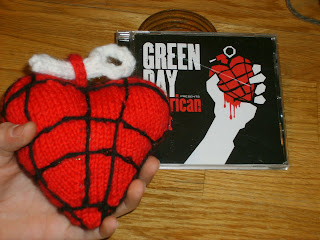 I sort of lost the impetus. They are, after all, fun to show certain people but in the end, they sit in my yarn basket waiting for me to knit that Ferrari, or digestive system, or machine gun. They are also things that don’t necessarily go over well with every knitter I know. Frankly, I don’t particularly care what other people think but I also don’t waste my time showing them around either. The knitter that can show you with loving care the Aran sweater that she knit out of her own eyelashes will probably not care that I agonized over whether to add a cerebellum to my crocheted brain. And for those people that think it is funny and then want to share their crocheted toilet paper covers with me, I would rather just go lie down with a cold compress on my forehead and Bourbon in my hand. Judgmental people are a drag to be around, especially when you are the guilty party.

Not planning to set a goal for knitting in 2007, I looked at my stash and picked out three skeins of Cascade Eco-wool that I had left over from a project but I never used. Thankfully, my local yarn shop will let you bring back yarn that you have not “tasted” yet and trade it in. I could have bought enough yarn for a sweater but instead, I had a brainwave (or perhaps a Jacksonian seizure) and started fingering the Cascade Quatro yarn which is displayed next to the Cascade 220. Now, I have a rather wild color sense, I love it when colors grab me by the throat. As I stood there, I really liked how the Quatro yarn and the solid 220 colors played off each other. Apart, they were nice but ordinary; together I do believe they rocked.

So I decided then and there to make a mosaic blanket. I had started a mosaic blanket a couple years ago with Bartlett Yarn and the old Mosaic Knitting book by Barbara Walker. I just picked random patterns and made squares but after about 4 squares, I laid them out together and the patterns hurt even my steely eyes. I still have them, waiting for some sort of inspiration in my yarn basket. 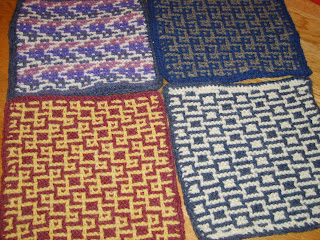 Since that first attempt, I purchased the new Mosaic Knitting book and Hot Damn! It has a brand new section in it with 83 different afghan squares. These aren’t just mosaic patterns made into equal squares; they are patterns which are the same no matter which way you look at it. 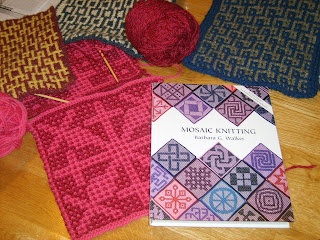 They are also pictures rather than random designs. Putting this blanket together will lead to far fewer seizures. (Now that could be a tag line for your local epileptic knitting guild!)

So, if I want a nice sized afghan, I am aiming at somewhere between 48 and 63 squares. If I want to knit this all this year, I will need to make at least 4 squares a month. This sounded a tad daunting until I sat down over New Year’s break and knit 1.5 squares in a day and a half. This is simple knitting that has me stopping every few rows just to look at the color play. It also looks different depending on your angle. The farther away you are, the more the foreground pops out at you. 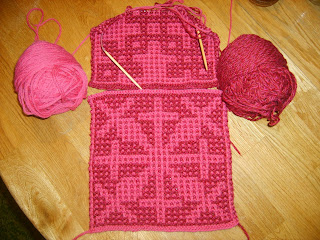 It is also a good project economically as I can go into the yarn shop every couple of weeks to get a new skein of Quatro and 220. The best projects are those that can be spread out over time. Just never, and I mean NEVER, add the entire cost up… 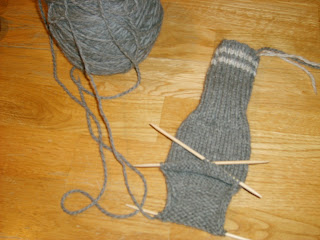 This is the other knitting at present time...a boring little sock for a sock class I'm teaching at the end of the month. 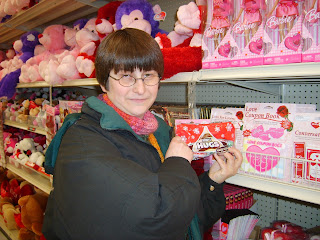 If you can find Christmas candy and Valentine's presents in the same aisle at Cub Foods, perhaps we're rushing things a bit.
Posted by Debbie at Wednesday, January 03, 2007

youre knitting is amazing! I am happy to have landed on this blog as i was born in superior and sadly have been living in icky florida since 78. mn. is still home I miss it all but hubby would freeze! Mom and dad owned Holzberg-hawkins Laundry in superior and it's now Lk. Superior Laundry? Cousins own security jewlers.wish I could head up there....one day take care! Lesley (Fostoff) Popko

Every Story Has A Beginning...